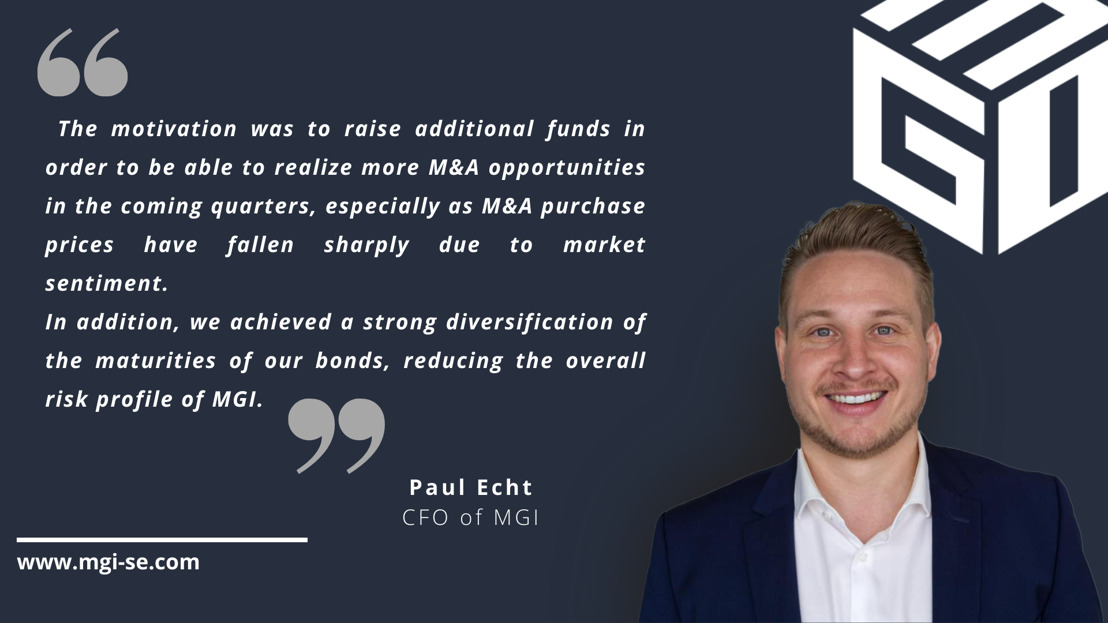 GBC AG: Mr. Echt, MGI was able to place a new bond despite the current tense market environment - especially for growth and tech companies like you. What were the reasons for this step?

Paul Echt: We have no specific capital needs as we have both strong free cash flow and sufficient cash of well over EUR 100 million. Nevertheless, the motivation was to raise additional funds now in order to be able to realize more M&A opportunities in the coming quarters, especially as purchase prices have fallen sharply due to the market environment and - should there be an economic downturn - are expected to fall further. In this sense, we are acting with foresight and from a strong position.

For our M&A strategy, this means that we are now positioned for the coming months in such a way that we can easily make smaller to medium-sized upfront payments with the cash we have on hand. Vendor loans and earn-outs (where a portion of the purchase price is paid at a later date based on performance) only become payable in cash or shares further down the line. This means that we can use existing cash to make acquisitions, utilizing modest level of cash at the time, whilst reducing near term liquidity risk and spreading the risk of equity dilution to shareholders.

We also think that with a strong cash position, it is always easier to discuss potential highvalue M&A deals, as sellers want to know, at least in theory, whether the buyers will be able to pay the purchase price, even if part of it is deferred, which is becoming more relevant for sellers especially in the current market environment.

This strategy as well as our M&A track record is generating strong investor interest, which is why the placement was so successful, and why we decided to increase the volume from the originally planned EUR 125 million to EUR 175 million.

GBC AG: Mr. Echt, what is your overall conclusion for this transaction, especially in light of the fact that the interest coupon is 0.5% above that of the existing bond?

Paul Echt: The fact that the interest coupon is higher than on our existing bond, which we initially placed at 98% below par with a coupon of 5.75%, reflects the changed market environment and the new reality in which we find ourselves, in which money costs more. We have to to adapt to this mentally and strategically, because inflation and rising interest rates will not disappear that quickly. Against this background, we rate the placement in the current market environment at a coupon of 6.25% p.a. at 98% below par, i.e. 0.5% p.a. higher than in the original bond, as a strong outcome.

Note that we used around EUR 115 million of the EUR 175 million to refinance parts of our existing bond, with many investors rolling over from our 'old' bond to the new bond, with a longer maturity, thus achieving further diversification of the maturities of our bonds, reducing the refinancing risk. We thus reduced the amount that has to be refinanced at the end of 2024 from EUR 350 million to EUR 235 million. We have also done this against the background of it being impossible to predict how financial markets will develop and how long a possible crisis will last. The EUR 235 million can now be covered by our own cash flow and cash resources and reduces the overall risk profile of the company, which is positive for all our investors.

GBC AG: MGI has developed from a pure games company to an advertising software company with its own games. Could you explain again what exactly the business model looks like now and where the investment focus will be in the coming years?

Paul Echt: Over the past few years, MGI has developed into a fast-growing advertising software platform that helps its customers acquire new users and monetize their advertising space. With our currently more than 450 software clients, 93% of our revenues is predominantly concentrated on the so-called "supply side". This primarily includes mobile game companies such as King or Zynga, which use our software to monetize their advertising space in the games. In addition, with our extensive games portfolio, which also includes the recent acquisition of mobile games developer "AxesInMotion", we have a very large number of our own advertising spaces as well as high-quality user data. This makes us very interesting for advertisers. Against this background, we now want to invest more in the so-called "demand side", which currently accounts for only 7% of Group revenues. This means that we want to build more direct relationships with advertisers and agencies who place ads via our own campaign management tool (a demand side platform). This in turn would mean that we would rely less on third party demand side platforms such as Trade Desk that bid on our supply from our own ad spaces and other companies such as as Zynga or King, so that we can again significantly increase our margin as we represent an even larger part of the value chain. To achieve this, we hired significantly more sales staff in the first quarter, particularly in the USA. The aim is to establish even more direct customer relationships with major advertisers in the USA. At the same time, we also want to invest more in demand-side platforms in order to buy direct customer contracts with major advertisers via M&A, where we can then realize very strong synergies with our existing supply side. Of course, the recent bond issue will also help us finance this strategy.

GBC AG: In view of the uncertainties regarding an ongoing Corona pandemic, the expansion of the Ukraine war and a further intensification of inflation, there is a risk of a significant cooling of the global economy or even recessionary developments. How stable or robust do you consider your industry and your business model to be in the event of a recession?

Paul Echt: If you look at all the indicators, from our point of view there is a chance of a recession. If that's the case, it's likely that advertisers' media budgets will also be affected, because companies can make relatively quick and flexible cuts in this area. This was seen, for example, in the second quarter of 2020, when Covid significantly impacted the advertising budgets of some companies from particularly hard-hit industries.

While a recession could have a negative impact on advertising budgets, one could expect the games industry to again show itself to be very resilient and benefit from it. This could be seen not only during Corona, but also in other financial crises such as 2008. The reason for this is simple; when people have more leisure time and, at the same time, less money at their disposal, they look for comparatively cheap leisure activities and most games are usually much cheaper than an evening in a restaurant, at the theater or at a concert.

However, it is not yet possible to realistically assess what effect a prolonged recession will have on our media business. It is possible that this business will grow somewhat less strongly, but we will aim to compensate for this with investments, especially in the area of data.

Paul Echt: We expect to continue to grow in 2022 and to benefit from the market changes in the media sector - deprecating identifiers and cookies. Even in light of a possible recession, we have not revised our growth targets downward in our quarterly report but remain positive about the rest of the year for the reasons already mentioned. We want to increase revenue by between 17 and 25% to between 295 and 315 million euros and raise EBITDA by between 17 and 31% to between 83 and 93 million euros. We were able to top the revenue target in Q1 2022. Revenue growth was 27% and adjusted EBITDA improved by 30%, driven by organic growth. We also acquired the highly profitable AxesInMotion in April. Further M&A transactions are not included in our outlook for the full year.

GBC: Thank you very much for the interview.

To read the full interview, click on this link.