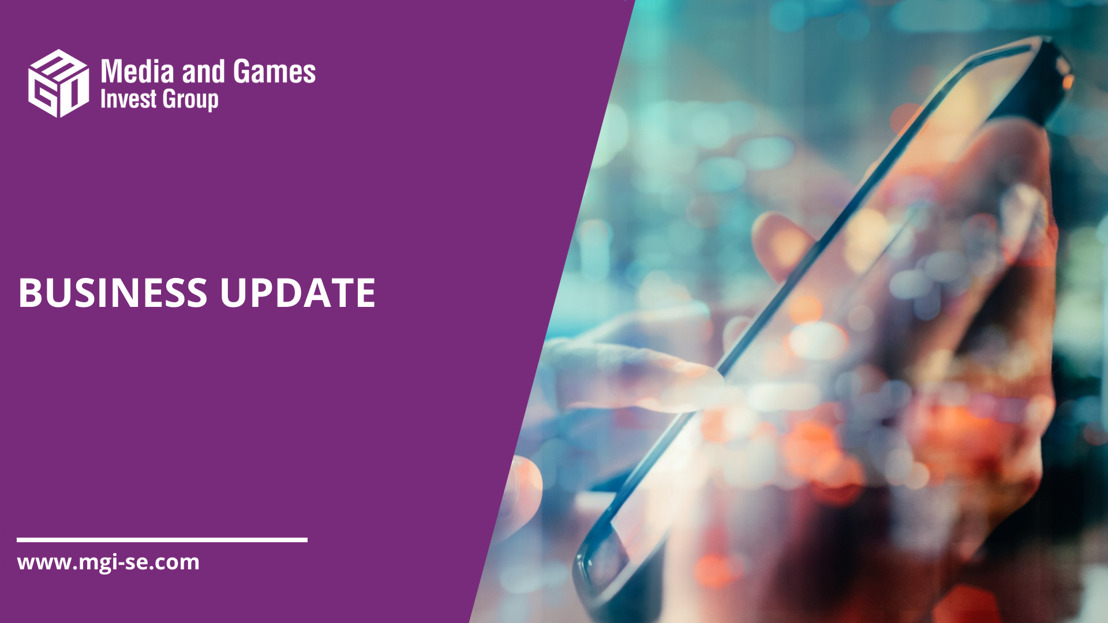 "We currently get a lot of questions, regarding which short- and mid-term effects Apple's changes regarding its identifier "IDFA", as well as the global supply chain issues, will have on MGI's business. In particular, the recent reports of negative effects by several other market participants, for example from social networks as well as from the hyper casual and casual games sectors, have led to uncertainties amongst investors", summarizes Remco Westermann, CEO of Media and Games Invest, the current market uncertainties and adds: "Overall, we see positive revenue- and profitability-impacts on MGI based on the recent IDFA changes. In fact, both MGI's media and games segments are benefiting from the changes regarding IDFA and the supply chain disruptions, while several other market participants are suffering. The MGI media segment Verve mainly targets companies with digital products and therefore the supply chain issues are not impacting Verve's revenues. Also, the media segment is widely diversified and apart from digital games not heavily inclined towards any specific advertiser or vertical. By investing early in innovations like contextual data as well as developing ATOM - an innovative advertising solution that can build audience segments on mobile devices using both behavioral and contextual anonymized data without using identifiers like Apple's IDFA, for which we have already announced the start of private beta on May 25, 2021 - Verve is growing and gaining market share, by enabling efficient targeting for user acquisition and higher CPMs for vendors, without using IDFA or cookies. Another reason for the growth is MGI`s wide portfolio of products: IDFA related reduction in effective cost per mille (eCPM’s) were compensated and even overcompensated by increases in existing IDFA users, better Android eCPM’s as well as other channels such as CTV/OTT, Mobile Web, Web and Online Video. The games segment is not affected by the IDFA changes due to its strong positioning in PC client and console games. Since our console games run on earlier version consoles -while new consoles being backward compatible-, MGI’s games revenues are also not negatively impacted by the supply chain issues. Overall, both MGI’s media as well as games segment showed a strong combined organic performance in the third quarter and in the beginning of fourth quarter 2021. Based on that, MGI is continuously outperforming the organic growth rates of the digital media and games markets.”

How MGI benefits from Apple's changes to IDFA

Apple’s IDFA and SkAdNetwork changes have been disrupting the digital media and games markets: Now it is required to ask users for their explicit opt-in permission to track them across apps and websites owned by other companies. This has recently negatively impacted especially large social networks, casual and hyper casual gaming companies as well as several AdTech players. MGI and its media segment Verve, however, are among a group of media players that are not affected in a negative way, but rather profit from these changes. Primary factor is a technical reason: Verve’s vertical omnichannel ad-tech-platform in most parts simply does not have to rely on IDFA-technology as it serves the full value chain from the advertiser through the demand side and supply side platform with thousands of direct integrations to publishers giving access to first-party mobile data. This enables Verve despite the recent IDFA-changes to deliver favorable costs per mille (CPMs) for publishers while also advertisers in an IDFA-less world can still efficiently target. This has led to many new clients as well as increasing volumes from existing accounts for Verve. Moreover, the demand side of Verve is affected positively: a lot of companies in the (hyper) casual-games-market feel the impact as traditional measuring of advertising on Apple phones has become much less efficient making advertisers to shift their budgets, accordingly. Here, Verve profits from these shifts and sees new advertiser-intakes based on the disruption in the industry, due to its strong position in contextual audiences as well as technical solutions such as ATOM which work very well without IDFA. Therefore, Verve remains on its growth trajectory for the demand and supply side. While (hyper) casual mobile games have to cope with the disruption brought by IDFA, MGI’s games portfolio, consisting primarily of strong PC and Console titles, that are practically not impacted by those changes and therefore shows continued strong growth.

Recent disruptions of global supply chains could cause affected companies to scale back advertising – why could MGI benefit from that?

Disrupted global supply chains are leaving the warehouses of many companies around the world empty. Companies that can't sell products due to supply chain problems may be forced to scale back advertising for their products which then also impacts several media companies which run campaigns for them. MGI and its media segment Verve, however, are in the fortunate position to have a customer base, which is largely composed of companies in the digital industry, especially the digital games industry. This industry offers mainly intangible products and services that are not affected by the physical constraints in global supply chains. Hence, MGI does not expect to be adversely impacted. On the contrary, MGI expects that demand and consumer spend will rather shift more towards intangible products and services due to the issues in the global supply chains for tangible products. While at the moment game console manufacturers are heavily affected by the supply shortages, this will not negatively affect the performance of MGI’s console titles as the player base is largely playing with the previous console versions while the games are ready to be played with the next generation of consoles when a player switches.

The integration of recently acquired Smaato is progressing very well. While the operations are further run by the Smaato teams; Verve’s top management consisting of the Co-CEO’s Sameer Sondhi and Ionut Ciobotaru are steering the planning and execution of the commercial, technical and product roadmaps in alignment with the overall Verve strategy as planned pre-acquisition. Initial revenue synergies have already been leveraged by connecting the platforms and by initial cross-selling activities with existing customers - both on the demand and supply side. The combined access to first-party mobile data via proprietary SDKs from Verve and Smaato is among the top 10 globally, giving the group a very strong position in a world without identifiers. While Smaato standalone (excluding the divestment of manage.com in 2018) has shown continues organic revenue growth in the previous years, we are pleased that we have been able to accelerate the organic growth in September and October 2021 already by unlocking several revenue synergies throughout Verve. The initial guidance of app. 20% organic growth for 2021 for Smaato standalone will be well achieved based on further additional synergies and growth initiatives to be realized in the coming quarters.

Based on improved internal systems and integrated finances, MGI will publish its Interim Financial Statements Q3 2021 earlier than originally planned and looks forward to its publication on November 15, 2021 (previously communicate date 30 November 2021). The results will be disclosed via press release and the Interim Q3 Report 2021 will be published on the company’s website www.mgi-se.com.

Media and Games Invest SE is a digitally integrated games and media company with main operational presence in Europe and North America. The company combines organic growth with value-generating synergetic acquisitions, demonstrating continuous strong, profitable growth with a revenue CAGR of 78% (2018 – LTM Q2’21). Next to strong organic growth, the MGI Group has successfully acquired more than 30 companies and assets in the past 6 years. The acquired assets and companies are integrated and amongst others cloud technology is actively used to achieve efficiency gains and competitive advantages. The Company's shares are listed on Nasdaq First North Premier Growth Market in Stockholm and in the Scale segment of the Frankfurt Stock Exchange. The Company has a secured bond that is listed on Nasdaq Stockholm and on the Frankfurt Stock Exchange Open Market.